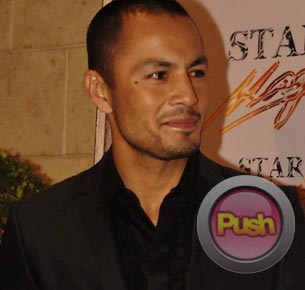 Derek Ramsay expounded on a controversial statement he recently made saying that he finds current girlfriend Angelica Panganiban "yummier" than his old flame, model Solenn Heussaff. He explained that since Angelica has been his girlfriend for the past four years now, there is every reason that he will find her "yummier" than any woman in his past. "Sa press con kasi tinanong ako kung sino ang mas yummy para sa akin, si Solenn o si Angelica. Ang sinabi ko mas yummy si Angelica because she'rsquo;s my girlfriend right now and siya 'lsquo;yung longest relationship ko. Sa amin ni Angelica there is something that binds us together. Our relationship lasted longer that what Solenn and I had."

Since Solenn is still close to Derek'rsquo;s parents and they have many common friends, the two would often run into each other and still keep an open communication. "She invited me sa launch ng perfume ni Hayden (Kho) kasi she was going to sing. I wasn'rsquo;t able to go because may taping ako. I invited her naman sa launch ng endorsement ko, but she was in Paris naman at that time. She keeps me posted with what she'rsquo;s up to."

But he explained that his friendship with Solenn doesn'rsquo;t affect his relationship with Angelica. "My relationship with Angelica is mature. She trusts me and she knows there'rsquo;s nothing going on with me and Solenn. She knows that Solenn has no feelings for me anymore. Alam ni Angelica kung sino si Solenn sa buhay ko at buhay ng pamilya ko and hindi siya nakikipag compete."

As much as Angelica doesn'rsquo;t feel jealous over Solenn, Derek on the other hand also has no issue with Angelica being close with her ex-boyfriends and other guys. "Angelica is friends with her ex-boyfriend Carlo Aquino and that doesn'rsquo;t bother me. I don'rsquo;t question her or she doesn'rsquo;t even have to let me know because I trust her. Alam ni Angelica na most of my friends are women. Siya naman may mga friends na lalaki, like sina John Prats. There'rsquo;s no jealousy or bad thought."