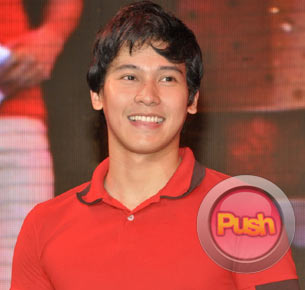 Enchong Dee has chosen to keep his relationship with ka-love team Erich Gonzales on a professional level despite pressure from many fans for them to have a real life romance. Enchong believes that he and Erich can focus more on their work if they would just remain friends. Their latest project is the new daily variety show Shout Out which premieres November 29.

But for some time now there have been rumors that Enchong is dating a non-showbiz girl; they were even being spotted together at a few events. When Push.com.ph asked if there'rsquo;s any truth to this, the young actor said, "Malalaman niyo na lang. Malay niyo pagbalik ko galing Pasko makita niyo kaming lumalabas."

Enchong refused to talk much about his love life, but he said that the girl is not completely "non-showbiz." He remained mum when asked to specify if the girl has a showbiz connection or is related to a particular celebrity.

His soda commercial wherein he had a kissing scene with Kim Chiu ignited speculations that the two will be paired by ABS-CBN in an upcoming project. Enchong would rather let his home network decide on whether he will work together with his former My Girl co-star. But on the issue of courting Kim, now that the actress has been said to have broken up with Gerald Anderson, Enchong explained that Kim is just a friend. "Na-misinterpret lang 'lsquo;yung sinabi ko. Admiration lang ang meron ako para kay Kim."