Piolo Pascual denies he is jealous that KC Concepcion is good friends with Sam Milby. 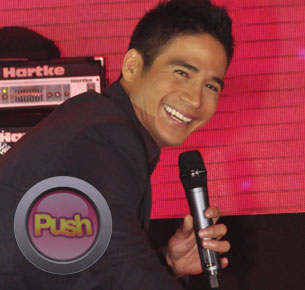 The rumor started when Sam confirmed that he would be doing a movie with KC next year. His closeness with KC allegedly made Piolo jealous. But Piolo explained that Sam and KC have been friends for a long time now. "Sam is friends with KC, even before pa kami naging close ni Kristina. They'rsquo;re doing a movie, I think they'rsquo;ll start shooting in January. Ako na rin nagsabi na bagay silang gumawa ng pelikula. They have many common interests na they can do together." Though Piolo has said several times that KC is a "special" woman to him, he remains cryptic on the real score between them.

Piolo also went on to dismiss speculations that a confrontation happened between him and Sam. Piolo said that after being in showbiz for more than ten years already, he is not a man who reacts on rumors. "Sa tagal ko na sa industriya I know na rin what to do. Hindi ko na pinapatulan 'lsquo;yung mag balitang hindi ko naman alam kung saan galing. I value the person more than the intriga. I believe mas magandang harapin mo na 'lsquo;yung tao to clarify the issue kaysa maniwala ka agad sa ibang versions."

He was also asked about the claim that he influenced KC to change managers and sign up under Star Magic, the same team that handles his showbiz career. The Ultimate Heartthrob clarified that he only talked to KC about signing up with Star Magic but he never forced her to make the decision. "I want her to be with Star Magic but that wouldn'rsquo;t be my decision. Sa kanya lang. It'rsquo;s unfair na she did that because I advised her. We talked about it but she made the decision and I'rsquo;m happy she chose to be with Star Magic. Ayokong makialam. I'rsquo;m not in the position to tell her what to do."

But Piolo admitted that he is very happy because from now on he and KC will be under the same management group. "It'rsquo;s so much better. It'rsquo;s easier for us to be together and work together." He also thanked Megastar Sharon Cuneta for saying in a TV interview that he had been a good influence to KC. "Good to hear that. All that I want is to influence other people in a good way and ganun ako kay Kristina. She'rsquo;s a very intelligent person and she knows what she wants. Nandito lang ako to support her."