Kim Chiu gets to try working with different actors as she becomes the featured artist in 'Your Song.' 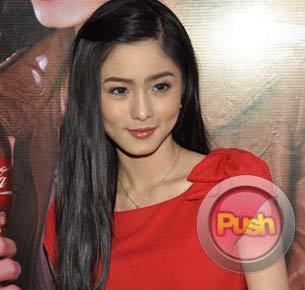 Kim Chiu said that she is excited about being paired with other leading men now that she will have her own project, Your Song Presents Kim. The young actress finally gets the chance to go solo via the weekly show after being in a love team for four years with perennial leading man Gerald Anderson.

While she will have the chance to work with different actors, Kim is also looking forward to working with Piolo Pascual, who is supposed to be her leading man in her next film. "Papa P (Piolo) na po 'lsquo;yon, ibang level na 'lsquo;yon," Kim began at the press conference of Your Song. "Siyempre parang ang sarap ng feeling at nakakatupad siya ng pangarap na Papa Piolo 'lsquo;yung makakasama mo."

There is also a big chance that Kim might work again with Enchong Dee in an episode of Your Song. The two had already worked together in the Koreanovela adaptation My Girl and the Your Song installment, My Only Hope. Kim also denied reports that she and close friend Erich Gonzales, who is also Enchong'rsquo;s perennial leading lady, are not on good terms. "Hindi kami magkagalit ni Erich. Tsaka nagugulat na lang kami sabi namin, 'lsquo;Day, ano ba 'lsquo;yan, may mga balita sa 'lsquo;tin.'rsquo; Sabi niya, 'lsquo;Oo nga, day ewan ko ba.'rsquo;" 'nbsp;

Kim did not deny fact that she will definitely miss Gerald as a love team partner. "Siyempre mami-miss ko si Gerald. Antagal ko po siyang nakasama and nami-miss ko 'lsquo;yung kakulitan niya, pag-aalaga..." The young actress also said she hopes that they will still have the chance to work together again in the future.