Carol Banawa reveals she is happy with her decision about leaving the Philippines. 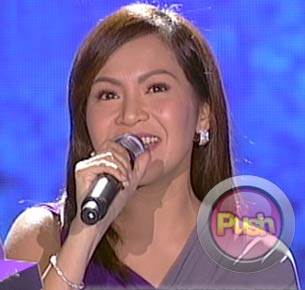 It'rsquo;s been over eight years since we last saw her in the primetime soap Bituin, but US-based singer-actress Carol Banawa'rsquo;s singing prowess has definitely not wavered since then. With the release of her Star Records album My Music, My Life, the former Ang TV talent has proven that she still has killer vocals. Initially, Carol was just supposed to come home for a one-month vacation in order to visit her dad and also to celebrate her recent graduation from a nursing course she just completed. When she was offered to do an album, the petite singer admitted she had some reservations. "Siyempre nandun yung fear na iniisip ko kung nandidiyan pa rin yung mga tao na dating sumusuporta sa akin, which is nakakatuwa kasi nandiyan pa rin nga sila," she said.

Currently, Carol is based in Fairfax County in Virginia with her husband Ryan and their three-year-old daughter Chelsea. The 29-year-old singer said that although she misses performing, she has no regrets with her choice to migrate to the U.S and build a life there. "It'rsquo;s more of singing talaga yung na-miss ko. Na-miss ko talaga yung singing inside the studio. Yun talaga yung na-miss ko, yung rinig mo yung sarili mo. Kumbaga may sarili kang mundo dun sa loob," she said. If she were offered to go back to acting, Carol said the chances are slim she will accept any projects because she plans to head back to the States after the holidays. "Parang kulang naman talaga sa oras if isasali ko pa yung acting. Alam niyo na naman na pag-taping, pag-shooting, eh mahaba talaga yung kailangan na oras. So ngayon ang focus talaga namin talaga is yung album. Since I'rsquo;m only here in a certain period of time, kailangan mapuspos namin yung pagpo-promote. Yung time ngayon since 'lsquo;til New Year lang ako, it'rsquo;s dedicated to promoting the album, " she said.