Luis Manzano says a simple conversation with Mariel Rodriguez is all it would take for them to be friends again. 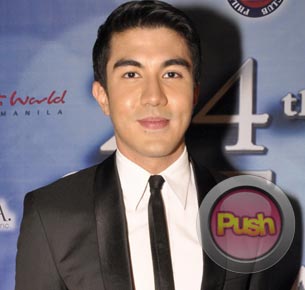 Luis Manzano told reporters at the press conference of his upcoming show, Laugh Out Loud, that he had heard that Mariel Rodriguez and her husband Robin Padilla had returned to the Philippines after weeks of shooting a movie in India. However, Luis explained that he has yet to speak with Mariel to fix the rift between them. "I saw pictures of her online na nakabalik na nga siya. But honestly hindi pa kami nakakapagusap ni Mariel but for sure sa liit ng industriya natin that is bound to happen. We can literally bump into each other or do another show together."

Last October, Luis revealed on Entertainment Live that he was harboring a "tampo" with longtime good friend and co-host Mariel, the reason for which he refused to elaborate. This news followed Toni Gonzaga'rsquo;s own confession that she had a falling out with Mariel, the reason for which is also still unclear. But contrary to what many believe, Luis explained that his issue with Mariel is not as serious as that with Toni. "Kung sasabihin kung ganun ang dating it'rsquo;s such a big deal. Pero hindi naman kasi. After a simple conversation, all will be well. Parang ang magiging connotation is 'lsquo;nagkapatayan.'rsquo; Hindi ganun. It'rsquo;s something na kayang ayusin ng simple conversation."

Luis added that he won'rsquo;t have a problem working with Mariel again if she decides to return as co-host of E-Live. "Kung babalik siya wala pang sinasabi sa amin. I'rsquo;m in no place to say anything because isa siya sa mga original hosts ng E-Live. Ako ay napasali lang." For him Mariel is very much welcome to come back since she is one of the pioneers of E-Live. "We should not forget na ang E-Live ay nabuo with the Kuya'rsquo;s Angels, si Toni, Mariel, and Bianca (Gonzalez). Late addition na ako. I will always have a high respect for her in terms of being a host of E-Live."

Again Luis dismissed claims that there was a problem between him and Robin that led to a confrontation. "Na-clarify ko na rin sa E-Live kasi may couple of write-ups na lumabas that said na nagka-confrontation kami ni Binoe. Never kaming nag-usap ni Binoe, like 'lsquo;yung sinabing tumawag siya sa akin or na-confront ako. Walang ring text because I don'rsquo;t even have his number. Never kaming nag-usap."

While this issue was still much talked about months back, Luis already had the chance to talk to Robin on the set of Pilipinas Win na Win when Robin and Mariel were still hosting the show. "Even naglalabasan 'lsquo;yung mga ganung issue, dumalaw ako sa Win na Win and we shook hands. Walang gulo sa amin ni Robin," said Luis.