Aside from fulfilling her childhood dream to see snow, Kim Chiu intends to become more independent by going abroad alone. 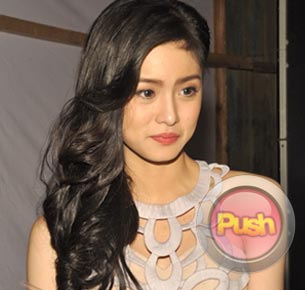 Kim Chiu shared that she intends to fulfill a childhood dream this coming Christmas, which is to see snow in a foreign land. "Ako since dati pa pangarap ko talagang makakita ng snow nung bata pa ako. Ngayon tutuparin ko na siya sa Pasko." What'rsquo;s interesting is that the young actress will go abroad all by herself. "Sa Pasko ise-celebrate ko nang mag-isa," she revealed. When Push.com.ph asked why she does not want to bring anyone with her, she replied, "Subukan [ko] lang. Adventure. Para maiba naman. Para bago naman." Kim said that she feels a bit nervous about her plan, but is nevertheless up to the challenge. "Meron [takot] pero tingnan natin kung ano ang mangyayari sa akin." She further explained that this is her way of trying to become more independent.

The actress was also teased by some members of the press as to why she is not planning to be with constant leading man Gerald Anderson this Christmas. "Sama-sama po kami pagkatapos ng Pasko," was her answer.

In a recent soft drink commercial, Kim has a kissing scene with Enchong Dee, who was previously her leading man in shows like My Only Hope and My Girl. "Nakakagulat, nakakapanibago," Kim said of the kissing scene. "Kasama sa story board 'lsquo;yun syempre trabaho." She related that it felt uncomfortable at first because there were a lot of people watching them while they were shooting. She refused to disclose how many takes it took for her and Enchong to do the scene.

Kim also commented on the news that international action superstar Jackie Chan expressed his interest to work with her. "Parang nakaka-flatter kasi Hollywood star tapos napansin niya ako," related Kim. "Kaso nagkaroon ng konting problem [pero] sana maayos po," she said. As of press time, she said that there are no definite details yet as to what and when the said project would be but added that her talent arm, Star Magic will have the final say if they will allow her to do the project or not.