Sponge Cola's Yael Yuzon talks about his relationship with Karylle and his career plans for 2011. 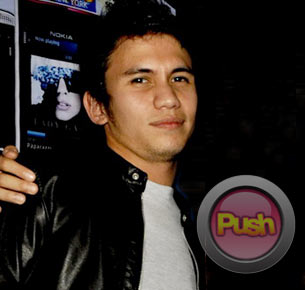 Known for keeping a low profile when it comes to his love life, Sponge Cola'rsquo;s lead vocalist Yael Yuzon tried his best to avoid talking about rumored girlfriend Karylle during the Myx Mo! 2010 concert last November 18. Though he refused to confirm or deny that they'rsquo;re now a couple, the 26-year-old told Push.com.ph that it'rsquo;s good to know that a lot of people approve of their closeness including Karylle'rsquo;s mom Zsa Zsa Padilla. "Well maganda naman kung madaming taong positive about things. Okay naman kami ni Karylle. Okay siya, oo cool siya kasama and maganda siya," said Yael who obviously didn'rsquo;t want to go into details about his love life.

Given a chance though, Yael said that he is looking forward to working with Karylle for any recording project. "I would like to work with her for an album or with anyone of my friends in the music industry'hellip; but especially with Karylle. Bakit kailangang maghintay pa ng February concert? Hindi ba pwedeng mas maaga para sabay ng pag-release ng album namin ng Sponge Cola? I mean, anytime we could do that since palagi naman kami nagrerecording ng band," he added with a laugh.

Yael is really inspired to write new songs for Sponge Cola'rsquo;s new album, which is slated to be released in 2011. Apparently, he and his bandmates have been recording in their own studio for a year now and they'rsquo;re really excited because they'rsquo;re coming up with something different for their avid fans. "We'rsquo;ve been playing the same songs for a couple of years now. But this time around, parang kung idi-describe ko siya'mdash;while most of our songs would be wearing T-shirts, long sleeves, jackets'mdash;ito marami sa kanila nakasando na aircon so parang mas magaan."

Asked about his favorite track in the album so far, he shared that there'rsquo;s one song wherein he really poured out his heart and soul. "So far wala pang title yung mga kanta, but there's this one particular song that sums up pretty much how I feel about the world and about everything you'rsquo;d encounter, both the good the bad, basta okay siya. Siyempre hindi nawawala yung love songs. It'rsquo;s like the best topic to sing about because it makes you feel young and light."