Actress-comedienne Pokwang indicated that she is open to the idea of ending rift with Cristy Fermin. 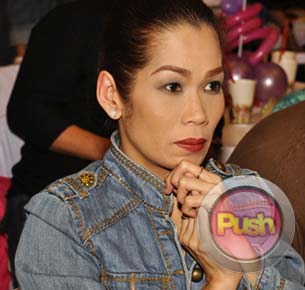 Pokwang said that she has finally reconciled with the idea that controversies are inevitable and has learned to take them with a grain of salt. She added that it is normal that all celebrities get involved in issues.

As to her rift with showbiz columnist Cristy Fermin, the comedienne said that they have not talked ever since Cristy lashed out at the actress-host for hinting that she owed Pokwang money. But Pokwang indicated that she is open to reconciling with the veteran showbiz personality. "Wala pa kaming interaction ulit pero kanina nga may nagtanong sa akin kung sakaling magkita kami ano reaction. Sabi ko kung ano po ang reaction niya. Kung positive siya, positive din ako." She added that she won'rsquo;t be a "trying hard" to mend the misunderstanding if the other is not ready to reconcile. "Siguro depende na lang kung ano ang mga kaganapanan."

Meanwhile, Pokwang has no hard feelings even if she seems to be the one always being left behind by her colleagues in some shows. The comedienne was among the last ones to be left behind when Willie Revillame left the defunct show Wowowee. She was left behind by co-hosts, Robin Padilla and close friend Mariel Rodriguez when the couple took an indefinite leave from Pilipinas Win na Win. And most recently, close friend Kris Aquino also left the noontime show to give way to new hosts. "Ibig sabihin 'lsquo;pag may naiwan, may misyon ka pa [so] ituloy mo lang. Nagbibigay lang kami ng saya," Pokwang explained. "Hindi naman ako nagtatampo na lagi na lang akong naiiwan. 'lsquo;Pag may naiiwan may darating na bago so wine-welcome ko na lang sila nang bonggang bongga."

She went on to say that she would rather count her blessings and make the most out of it. "Mahalin mo ang trabaho mo, lalo na kapag ang trabaho mo ay nasasakop ng ganitong industriya, kasi hindi lagi kang mainit so ipon." She also pointed out the importance of caring for her co-workers regardless if they are big stars or camera men. "Sabi ko mula nang magsimula akong magtrabaho sa ABS-CBN sa show business hindi ako nakaranas ng minaliit ako ng mga malalaking atistang nakatrabaho ko," she said proudly. "In fairness sa lahat ng malalaking artista alam nila kung sino-sino kayo, never kong naramdaman na out of place ako. Sobrang na-appreciate nila ako." In return, the actress-host said that she is paying it forward by treating showbiz newcomers she gets to work with.