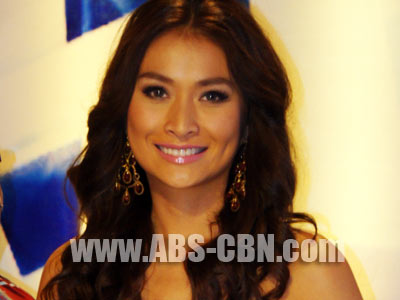 At the recent StarStudio Celebrity Style awards where she was a presentor, Phoemela Baranda was all for supporting the celebrity fashion event. “I’m just very happy because I came from the fashion world and it’s nice to give an award and give credit to those who take time and importance to fashion. When you think of celebrities kasi, you think of acting awards. So to give them a award for fashion is really a good idea,” she says. The model and TV Patrol reporter shared that she noticed the growing importance of fashion not just in the entertainment industry, but with the public in general. “People are more fashion-forward now, not just the celebrities, but all people,” she said.

After recently celebrating her birthday, Phoem says she chose to just have a low-key dinner party.  “It was very simple. I had dinner with friends for my birthday salubong kasi I don’t have my parents anymore so I celebrated it with close friends and cousins. That was on the eve of my birthday,” she says. The pretty host also shares that she treated herself to a new set of wheels this year. “I got a new car, a Mitsubishi Montero. Kasi yung car ko before for six years gave up on me na so kelangan na palitan. Sumuko na siya so I gave myself a new car,” she says. Phoem also had a simple birthday wish. “Of course I wish for more happiness. I feel so blessed actually. Because I’ve been working hard and I also wish for good health, yun lang.”

Admittedly not dating anyone at the moment, Phoem says she is content with just being single for now and that she and ex-boyfriend Ira Cruz are on better terms. “About the last guy that I dated, wala na yun. I’m very much single but I am happy. Okay na kami. We text. We’re okay. We’re civil. I’m happy na rin for Ira,” she says. Phoem also shares her thoughts on what happened between The Buzz and showbiz reporter Jobert Sucaldito. She says that unlike Jobert, she cannot say that she has been neglected or has any major complaints with how she is treated on the show. “I cannot say that for myself because I still love my The Buzz family and I still treat them as close friends and family and they still treat me well naman. Kasi with The Buzz naman, I have no hard feelings. Because I know they have to do everything for the show, for the format and the new face for the show. Siguro Tito Jobert has his own sentiments and I have my own sentiments but not to the point na galit. Not to the point to resign. In showbiz naman, you know that you’ll have to change the face, you have to change the host, the artist, so no hard feelings. I still love The Buzz,” she admitted.