Kris Aquino and sons Joshua and Baby James will remain in isolation in their condominium for another week. 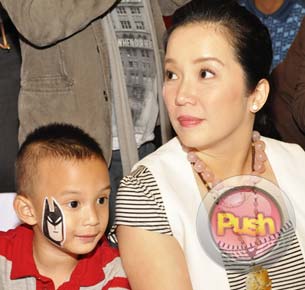 Kris Aquino and her two sons Joshua Aquino and Baby James 'lsquo;Bimby'rsquo; Yap Jr. are currently under medical observation after contracting hand foot-and-mouth disease.'nbsp; Kris posted on her Twitter account dated October 7, "We r all sick. Josh caught foot 'amp; mouth disease. Nahawa Bimby 'amp; me. I don't have the sores around the mouth or the rashes sa hands 'amp; feet but my fever went up to 40 (degrees Celsius) last night."

Kris also posted the current condition of their family as they remain in their condominium unit for recovery.'nbsp; "We r all taking Zoverax 'amp; Immunosin. Ang tibay the 3 yayas, Yaya A, Gerbel 'amp; Ruby. Di sila nahawa. Rare daw for an adult to get hawa but u know me- lapitin ng sakit. Naka isolate kami for at least 1 week."

She is thankful that Josh is already showing signs of recovery and he is resting on a separate room.'nbsp; "Bimby 'amp; I r in 1 room since we still both have fever- Kuya's in his room because he's pagaling na. If we have contact w/ him baka mabinat s'rsquo;ya. Last night grabe- they iced na my feet 'amp; head because fever was 40. We're not allowed to leave our condo til next weekend."

In her Twitter post dated October 3, Kris wrote how Josh had fever after contracting a then unknown virus.'nbsp; "Good morning. Day 2 of our shoot. Kuya Josh caught a virus- he had 39 fever at 6 AM. At least I know na that it will take 4 days for him to recover. Sana he won't have appetite para he'll lose weight while sick."

Medical studies describe hand-foot-and-mouth disease as a mild, contagious viral infection common in young children usually caused by a 'lsquo;coxsackie'rsquo; virus.'nbsp; HFMD is characterized by sores in the mouth and rashes on hands and feet, accompanied by fever, sore throat, malaise, blister-like lesions on the tongue, gums, and inside of the cheeks; blistery rash on palms and soles, loss of appetite.'nbsp; Practicing good hygiene is recommended to lessen risk of infection of HFMD.