Singer Richard Poon says that Maricar Reyes is someone he is seriously pursuing. 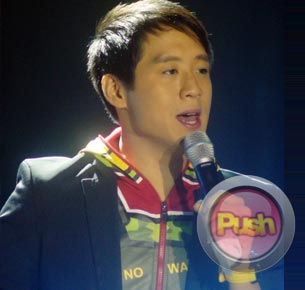 Crooner Richard Poon openly talked how smitten he is by actress Maricar Reyes and revealed that they have been going out for a month now. Richard said that she first met Maricar a year and a half ago through Mr. Johnny Manahan and Ms. Mariole Alberto, the heads of the ABS-CBN talent management arm, Star Magic.

Richard and Maricar shot a music video and a friendship ensued. "Nag-shoot kami sa beach, ang init, we were perspiring and all and we met each other and I knew she is a doctor and then nag-uusap kami in between," the singer said at the press conference for his upcoming concert entitled Richard Poon The Crooner A 25-Piece Orchestra Concert. "And then I was asking her about being a doctor and then for some people it'rsquo;s just a talk pero we felt very easy. I don'rsquo;t know why 'lsquo;no and then after no'rsquo;n hindi kami nagkita."

Last September, during the Star Magic Ball, they bumped into each other again and eventually agreed to go out more often to catch up with each other. "We have long conversations whether coffee or something so we really get along and so I'rsquo;m really pursuing her seriously and you know'hellip;" he said. 'nbsp;

He described Maricar as a very private person but is proud of the fact that the actress allowed him to get through those walls. "She'rsquo;s a walled person. If you really know her, she'rsquo;s very private, pero sabi niya, 'lsquo;Ikaw Richard, you get through my wall.'rsquo; And for me nung narinig ko 'lsquo;yon, parang, 'lsquo;Thank you if I get inside.'rsquo;'nbsp; And we talk about so many things or whatever, so that really made it click. For me it'rsquo;s nice that I can find somebody na super-duper crush ko." He added that he is happy that they can talk about anything under the sun. "So I'rsquo;m seriously pursuing her and I hope sagutin niya ko," he professed. 'nbsp;

Richard stressed that though he admitted that he and Maricar are dating, he still wants to keep some privacy about their relationship. "She'rsquo;s a very private person I want to respect that and the fact na I'rsquo;m also a very private person. Hindi naman ako showbiz 'lsquo;no. I think that similarity on that area makes it very'hellip; at ease siya and ako I'rsquo;d like to protect her from... I just wanna be there for her kasi when you get to know her kasi there are so many things that people don'rsquo;t know about her and I enjoy the more I get to know her. Enjoy ako." 'nbsp;

Richard is also hoping that Maricar can make it to another concert of his, Richard Poon The Crooner on November 12 at the PICC Plenary Hall.