Mark Gil says that he does not teach his children about acting. 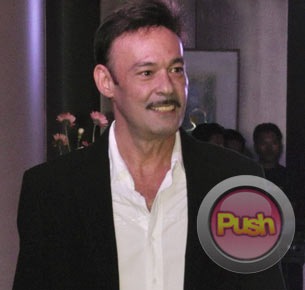 Mark Gil is already excited about working with daughter Andi Eigenmann in an episode of Your Song Presents: Andi. He said that he has no idea yet what the script is about, but he is hoping that it will be a good one. Andi has already worked with mom Jaclyn Jose in the pilot episode of the said TV special.

Mark added that Andi told him that she is nervous about their upcoming presentation because it is their first time to work together. The seasoned actor said that he advised his daughter, "Don'rsquo;t be nervous, don'rsquo;t be prepared. Just take it as another taping day, just another day'rsquo;s work."

Though he sometimes watches Andi'rsquo;s shows, he said that he does not go out of his way to monitor all of Andi'rsquo;s TV performances because he is confident of his daughter'rsquo;s talent. "She only asks me advice about cars," he said fondly of Andi.

Mark also added that as an actor, he would not give his kids special treatment when it comes to work. "I'rsquo;m sorry pagdating sa set walang daddy," Mark shared. "With all due respect I don'rsquo;t see them as children I see them as other actors and I hope they will see me as another actor."

Mark revealed that contrary to other people'rsquo;s perception, he does not really teach his children about acting. "Wala kaming tintuturo sa kanila. Ang turo namin you are on your own, you find your path and your way. Andirito lang kami if you have questions." He added that this was also how they were treated by their parents, who are respected actors in showbiz, Rosemarie Gil and Eddie Mesa. "Nobody teaches acting, it is born within. Now I see my daughter Andi I see her act, go. I don'rsquo;t have to advise them. They'rsquo;re on their own, they'rsquo;re intelligent enough."