Now that he has moved from music to TV, Rico Blanco says singing is very much like acting. 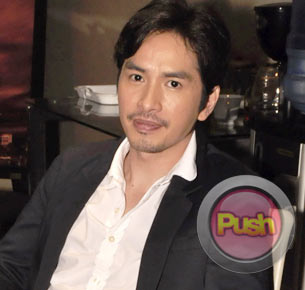 Rico Blanco makes his TV acting debut via the teleserye Imortal headlined by John Lloyd Cruz and Angel Locsin. The former vocalist of the band Rivermaya portrays the role of Lucas Teodoro who later on develops special feelings for Angel Locsin'rsquo;s character, Lia.

In 2006, Rico had a bit role in the independent film Nasaan si Francis? He related that there have been many acting offers in the past, but he felt that it was not yet the right time. "Many factors [that made me decide to try acting] po, eh I guess this time around I'rsquo;m a solo artist [so] I have more flexibility in my schedule. Siguro timing rin po talaga lahat," he explained.

He also revealed that another big factor why he accepted the role in Imortal is the chance to work with a brilliant batch of thespians. But even if he is trying out acting, the singer said that he is not giving up his singing career. "Continuous po 'lsquo;yung shows 'lsquo;pag weekends na wala kaming taping, makakapag-concert."

Rico pointed out that contrary to others'rsquo; opinion, there are so many things in common between singing and acting. "I guess it'rsquo;s not so different. Mas marami siyang similarity sa field namin. Music and acting as opposed to maybe someone who'rsquo;s nasa sports or abogado tapos acting. Ang pinaka pinagkaiba 'lsquo;yung process. Pero 'lsquo;yung pinaghuhugutan parang pareho lang po."'nbsp;