Former Pinoy Big Brother Teen Ryan Bang continues to win audiences over with his natural charm and sense of humor. 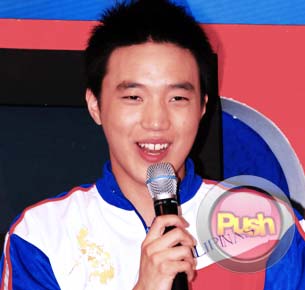 Viewers first knew him as the charismatic and well-loved teen housemate on Pinoy Big Brother, but now Ryan Bang (born Bang Hyun Sung) gets a big break via the new Studio 23 show 30w POwhz! (a play on jejemon speak which basically means 'lsquo;Hello po!'rsquo;). Having come to study in the country for a few years now, Ryan says he has a Filipino heart. With his new show, the 19-year-old student admits he is excited about immersing himself in Filipino culture and explore more of the country he is now proud to call his home. "I'rsquo;m very happy because I'rsquo;ve been living in the Philippines for five years now and I am a happy person so I have a chance to make people happy. I like comedy. I feel very comfortable now," he admitted during the Studio 23 presscon launch for his new show. The Seoul-born teen says his family is also very supportive of his newfound career. "My parents are now in Korea but they went here for Big Night. They'rsquo;re very happy for me. My mom and my dad are very happy right now," he added.

Although currently busy taping episodes for 30w POwhz!, Ryan admits he is learning a lot and having a lot of fun at the same time. One of the first episodes will feature his first time to ride an ordinary bus down EDSA while he records his adventure with his own video camera. "It is very fun. We went to Balintawak. I ride the bus. I shop. It was my first time. So many people. The bus was very fast. Even faster than a taxi! It was also cool because the driver was going very fast so the air is very cold. I didn'rsquo;t know it can be cold in Manila. I like very much!" he says. The natural comedian, who is also seen on daily on Showtime and Banana Split is very excited about all the adventures in store for him in the show. "I'rsquo;ll do comedy. I will go to places and talk to people, learn the culture, and have fun. I hope people will understand my English and Tagalog. I will go around here in the Philippines. Make experiences, be natural. I'rsquo;ll go anywhere kasi hindi ako alam 'lsquo;di ba? I go around, ride the bus, tricycle, like Philippine style. I'rsquo;ll go eat with them, play something, just like natural. I'rsquo;ll talk to people like friends. I really like it. Just be natural. I hope people will be happy. 30w Pohwz is like a comedy show, I'rsquo;ll go around, have fun. I like comedy," he said. A cooking challenge on the show even has the former teen housemate cooking adobo and bopis. "I love how Filipinos cook. I cook, so that'rsquo;s why hindi masarap (laughs). Pero okay lang. This is a very big experience, that'rsquo;s why I like," he said.
'nbsp;
Catch 30w P0whz! as it airs every Monday, 9:30 pm on Studio 23.