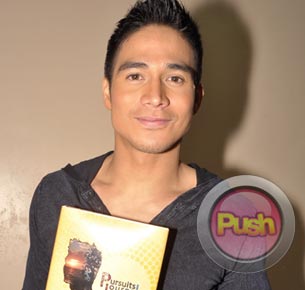 In a recent interview with Piolo Pascual, the dashing actor told Push.com.ph that he was really thrilled for his former leading lady Judy Ann Santos for giving birth to a healthy baby boy last October 7. "Finally! Matagal tagal na rin nilang (Judy Ann and husband Ryan Agoncillo) hinihintay ito so of course masaya ako para sa dalawa na meron silang baby, si Lucho (full name Juan Luis). Right away when I got the news na nanganak na si Judai, I prayed for them. Napakasipag ng dalawa and I am praying for more babies to come because I'rsquo;m sure they'rsquo;ll be wonderful parents."

When asked if he had the chance to visit Judy Ann in the hospital, Piolo explained that he'rsquo;s loaded with lots of work commitments, but he already sent his best wishes to the couple through director Joyce Bernal. "Hindi pa kami nakakapag-usap ni Judai pero pinarating ko naman through our common friend, si Joyce, na i-greet siya for me." As a matter of fact, Piolo'rsquo;s even willing to be one of the godparents of Baby Lucho if given the chance. "Oo naman. Judai and I go way back. Nothing can change that."

Avid fans have been waiting for Piolo and Judy Ann to have a reunion movie since it'rsquo;s been four years since they did the movie Don'rsquo;t Give Up On Us. "You try to get what people want to see. So if ever, you know, one of these days maisipan niyang makipagtambal ulit sa akin, I'rsquo;m more than willing to do it," Piolo said.