Rico Blanco on working with KC Concepcion: Im not interested

Rico Blanco is not keen on doing a guest appearance on Simply KC, even if the management requires him to. 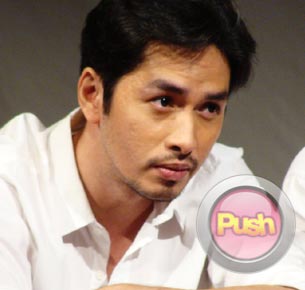 After doing music for more than a decade now, Rico Blanco takes on a new challenge in his career by acting in the new primetime teleserye Imortal.'nbsp; From being a member of the band Rivermaya to going solo as a singer-musician, Rico had created numerous original songs, but little is known about his personal life.'nbsp; During the press conference for Imortal, Rico told PUSH.com.ph and other reporters that he strongly believes that intrigues are not the only way an artist can promote himself.'nbsp; "Contrary to general perception, that that'rsquo;s the only way to do things, I believe one can have a good relationship with the media that will give the artist 'lsquo;yung option how they want to market themselves.'nbsp; I don'rsquo;t want to offend artists who enjoy talking about their personal lives.'nbsp; If that'rsquo;s their thing, to each his own and I fully respect that."

Rico used his music career as an example, which became very successful more because of the quality of his work rather than mostly false and irrelevant intrigues.'nbsp; "I believe pwede naman mag-offer ang artist ng ibang bagay.'nbsp; All throughout my career na mahaba-haba na rin, I'rsquo;ve always let my work speak on my behalf. Kung noon music, ngayon acting naman, hopefully."

The 37-year-old rock star was once romantically linked to KC Concepcion, daughter of Sharon Cuneta.'nbsp; Now that he is doing teleserye, just like KC, is he willing to work with the Megastar'rsquo;s daughter?'nbsp; Rico briefly answered, "I'rsquo;m not interested." Rico said he is not even keen on doing a guest appearance on KC'rsquo;s morning talk show Simply KC, even if it'rsquo;s for the promotion of Imortal.'nbsp; "There are many avenues naman how to market something.'nbsp; I believe we have more than enough channels.'nbsp; I don'rsquo;t think that that'rsquo;s needed.'nbsp; If it'rsquo;s up to me, I'rsquo;d rather not."'nbsp; When asked if the network'rsquo;s big bosses will require him to guest on Simply KC, Rico only answered, "I don'rsquo;t think they can require me."

About lead actor John Lloyd Cruz, who plays Rico'rsquo;s adopted brother, Rico explained that rather than feeling intimidated b