Vicki Belo on having Kris Aquino back as a Belo endorser: 'Now my heart is healed'

Vicki Belo is happy to have Kris Aquino as her friend again. 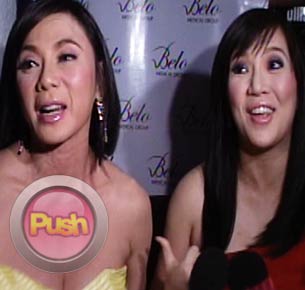 "I am back with the best" is the slogan of Kris Aquino's comeback as Vicki Belo's endorser. A few years ago, Kris had to quit being a Belo endorser after her husband James Yap supposedly had an affair with one of Belo's staff at her clinic. But now the two showbiz beauty icons are back together and they both felt that it was the perfect time to do so. In the interview during Kris's press launch launch, Vicki and Kris said that it was an easy deal for both parties. "I think naging madali kasi nung nag-usap'hellip; Andaling kausap, madaling napag-usapan then we were all ready, we were all at a place in our lives na gusto namin," Kris said. "Aminin mo na, miss na miss mo ako," Vicki added, teasing Kris.
'nbsp;
On the other hand, Vicki admitted that she did miss Kris a lot and she is happy that their friendship is revived. "The reason I miss Kris so much is that she's not just an amazing endorser, one thing about Kris is that she is intelligent and she will not endorse something she (does not believe in). Of course, I wanted Kris back but I was hesitant to ever approach her so never ko naman siya kinakausap. We haven't seen each other the whole negotiation, hindi kami nagkita so nung nagkita kami it was wonderful kasi when we first met after so many years without meeting parang it was just like the old times. May konting awkwardness for about ten seconds pero after that it was back to normal. In fairness kasi Kris hasn't done anything wrong to me medyo we were both victims of a circumstance so I think both our memories of each other are good so parang bumalik lang," Vicki shared.

'nbsp;"Ang sarap to have her because Kris is not ever just an endorser, she is also a friend and more than that she is my advisor kasi this girl is so smart, she'll text me, 'You know you should get Jovit (Baldivino), you should fix his skin. The other day she was in the clinic, I was wearing shorts and wala akong ka-make-up make-up and nung sabi sa akin na nandiyan si Kris, umikot ako at umuwi ako ng Greenhills kasi once she told me, 'Doktora, you can never look like that,' but once in a while I'd like to have off days. Ito naman (referring to Kris) palagi akong pinapagalitan which is good kasi I don't listen to anybody else, matigas ulo ko pero kapag sinabi niya, I would think she's right," Dra. Belo further explained.
'nbsp;
Kris revealed that they signed the contract last May 9, the day before the presidential elections. Vicki admitted that it was planned on purpose so as to avoid misconceptions from the public. "I don't want people to say that, 'Kinuha nila si Kris kasi kapatid ng presidente,'" Vicki revealed. "Actually May 9 talaga kami nagpirmahan, it was a Sunday sinabi ng Feng Shui na maganda and she appreciates it kasi alam niya na hindi talaga alam ng tao anong magiging outcome. And of course we got her because she'rsquo;s Kris, not for anything else." The Belo Medical Group signed Kris up for three years.

Vicki shared that their friendship is "sweeter the second time around" for they are better persons now, who both went through and survived an