With pictures and videos of Manny and Krista together surfacing on the Internet, people are raring to know what's the real score between the two. 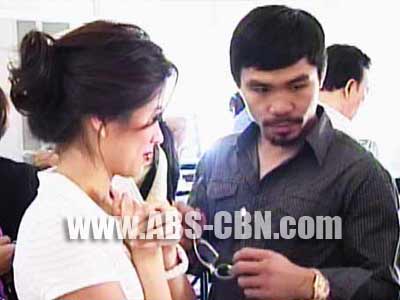 With Manny Pacquiao’s return to the country tomorrow, people are abuzz if he’s ready to answer questions regarding his rumored relationship with actress Krista Ranillo. News of Manny’s alleged relationship with the sexy star further intensified when the Pacman’s wife, Jinkee, cried buckets during a thanksgiving mass in Las Vegas, Nevada. Jinkee and Manny also arrived at the LAX airport yesterday in separate entourages. When the press asked Manny’s mother, Dionisia, about Jinkee’s display of emotions during the mass, her only words were, “Siyempre napaiyak sa pagkapanalo ng asawa niya.”

After videos of Manny talking to a woman inside a car after his appearance on the Jimmy Kimmel Show surfaced on online sites, pictures of the boxer with Krista in Baguio have also started to spread on the Internet. The pictures were supposedly taken during Manny’s training for the Cotto fight in the City of Pines last September. The two have reportedly gotten close during their shooting for Manny’s Metro Manila Film Festival entry Wapakman where Krista plays one of his leading ladies. The 28-year-old actress has yet to give a statement and according to her road manager, Krista will be returning to the country this Tuesday. Her camp has remained mum on the controversy and stated they will only give their side of the story if the People’s Champ releases an official statement on the issue first.

On the other hand, Jinkee’s family in Sarangani couldn’t help but express their disappointment towards the People’s Champ although they have yet to talk to Jinkee about the issue. “Bilang ina syempre nasaktan ako, kung ano-ano ang mga intriga ng mga tao, sila na siguro ang magdesisyon dyan,” Rosalina Jamora, Jinkee’s mom commented. She added that she hopes Krista will be wise enough to steer clear from trouble. “Sana naman alam naman nila na may asawa yung tao, may pamilya, sana sila na ang mag-iwas.” Jinkee’s dad, Nestor Jamora, also revealed that he now has no intention to support Manny’s upcoming movie because of his rumored involvement with Krista. Also he said this might affect Manny’s decision to run for Congress this coming 2010. Reports from TV Patrol World